While the number of migrants crossing the border with Mexico has skyrocketed under the Biden administration and the number of encounters has reached levels not seen in more than two decades, the number of bodies found by U.S. Customs and Border Protection is also skyrocketing.

The number of deaths at the border has reached a record high.

According to statistics compiled by UCBP, at least 782 illegal immigrants have died crossing the southern border in fiscal year 2022, surpassing the previous year’s record by more than 240.

The United Nations International Organization for Migration has called the U.S.-Mexico border crossing the deadliest migration route in the world.

Law enforcement agencies have set up mobile morgues to handle the increasing number of bodies found along the southern border.

In an interview withReal America’s Voice reporter Ben Bergquam, a sheriff details how law enforcement officials coordinate with border patrol agents to identify the bodies of the dead migrants. “We’re in Brooke County, Texas. The sheriff just took me to the morgue they’ve set up. It’s in response to all the bodies that have died in this county, illegal immigrants, and they’re doing their best to identify them,” Bergquam explains. “This is what open borders look like.”

The sheriff is seen in the video opening a body bag containing the remains of an illegal alien.

Because the migrant’s body has decomposed, uncovering fingerprints from the body is essential to identifying the body, the sheriff explains.

“We’re trying to identify the remains. We look at different things, I mean one of the things we look at is the hands,” the sheriff said. “What I’m always looking for is to see if I can find a usable fingerprint. These are weathered, kind of leathery. I’ve to do a two-step process of soaking and rehydrating the hand to pump up the fingers so we can get a print.

“After that, we can’t print in the traditional way by rolling them. So we do something called microphotography. We use a special lens that makes the grooves and everything else on the fingerprint visible. We take those images and transmit them to the Border Patrol so they can put them into their database so their analysts can look at the fingerprints to see if they can make an identification.”

“This is the reality of open borders. Everyone that says open borders are ‘compassion,’ this is what you’re creating. That is what open borders look like,” Bergquam admonished. “I can’t express to you the smell. It’s terrible. That’s what these guys have to deal with every single day. That’s what you are inviting, more death, more destruction. The destruction of our country and the death of thousands.”

Despite record number of border crossings and migrant deaths at the border, the Biden administration claims the “border is secure” 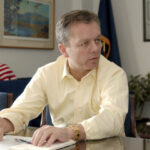